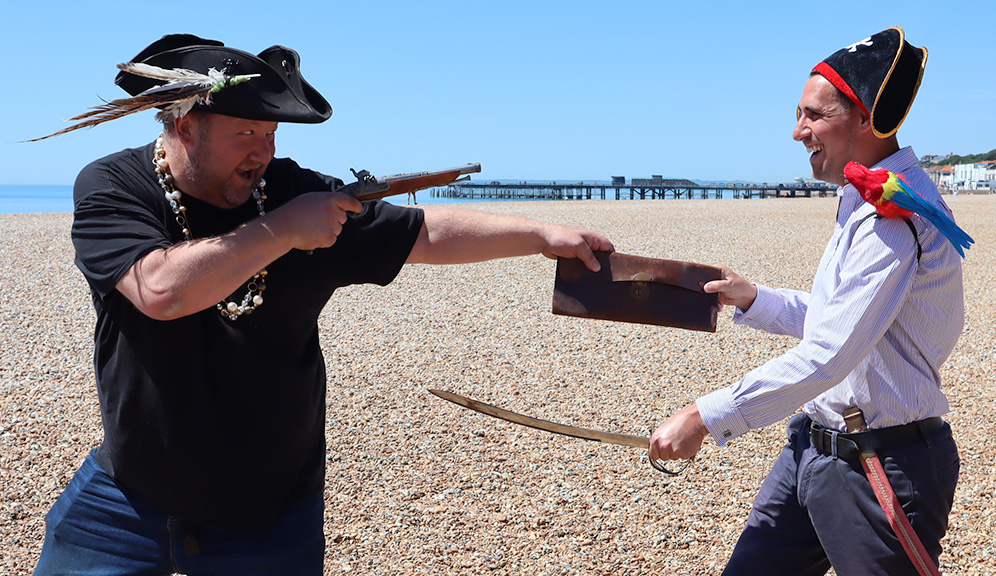 This year’s main event is the celebration of 10 year’s of being the unrivaled Pirate Capital of the World, sponsored by Lightning Fibre. Hastings retains the Guinness World Record for "the largest gathering of pirates in one place". The number is 14,231 people dressed as pirates, who secured the World Record gathered on Pelham beach in 2012.  Every year, large crowds of people gather dressed as pirates, many now consider the town as the "pirate capital of the world"! Rival towns, such as Penzance, have tried to beat the record but so far have been unsuccessful in their attempts.

Hasting's Pirate Day takes place over two days - Saturday 16th July and Sunday 17th – with pirate fun for everyone in our town’s pubs, venues and attractions. There will be live music on 2 separate stages at the Stade and on the Pier, side shows, pirate acts, parrots, storytelling, quizzes and treasure hunts… some fantastic prizes too, and other surprises along the way.

Join us on Sunday for the PIRATE PROCESSION as we celebrate and gloat at our 10 years of being the unrivalled ‘Pirate Capital of the World’. This year we will have two contingents of the procession; both will form up from 2.45pm and leave at 3pm. They will parade to meet at Pelham beach where the commemorations will begin.

Memories of the last 10 years Pirate events will be played on the big screen. The event will conclude with the screening of 80s family favourite pirate adventure film ‘The Goonies’ for those of you that want to enjoy a chilled end to your weekend.

The weather is going to be HOT, please take extra care when travelling to / from the event, wear plenty of sun cream and carry drinking water. Stay out of the sun if possible. People with health conditions should stay at home. More info HERE

Read more about Pirate Day on the OFFICIAL WEBSITE